I borrowed my brother’s iPhone in order to capture the video.

My dad and I made a wifi garage door opener and status checker.

We did this project crazy-fast and without any hang-ups, which was interesting to me because it showed how far along the tools have come.

Our garage door opener has a physical panel just outside where one can enter a 4 digit pin and open the garage.

After some fairly recent rain storms, the panel has been malfunctioning and fails to work 95% of the time. It’s not a battery issue.

It was expensive to replace that from the manufacturer, and we didn’t want the same faulty product!

This would take two GPIO pins.

I used Nerves on an old Raspberry Pi.

Essentially it helps you compile a barebones linux kernel with the init system replaced.

I chose Nerves because I like Elixir and the emphasis placed on making fault-tolerant systems right from the start. I think it’s quite apt for the embedded space.

After making Nerves development easier on Mac, I started the project.

Controlling GPIO pins was easy to do thanks to Elixir ALE.

The core concept is to listen on HTTP and allow read/write on any GPIO pin:

Credit goes 100% to my dad for all the circuit design and prep downstream of the GPIO pins. If you’d like to replicate this look at the reference schematics for an appropriate voltage reed switch and opto-isolator.

A Normally Open (NO) Reed Switch and a magnet are used as the Garage Door status sensor. The Reed switch is installed on the frame, and the magnet on moving door. When the door is in the closed position, the switch short the PI’s input to ground indicating logic “0,” otherwise that input is in logic “1.” We chose a passive Reed magnetic sensor over hall effect transistor because the latter would have required access to a supply voltage and therefore we would have to run 3 wires from PI to the sensor.

All I had to do was put the board together with the Raspberry Pi: 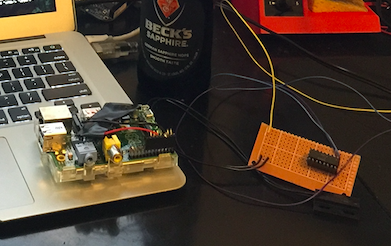 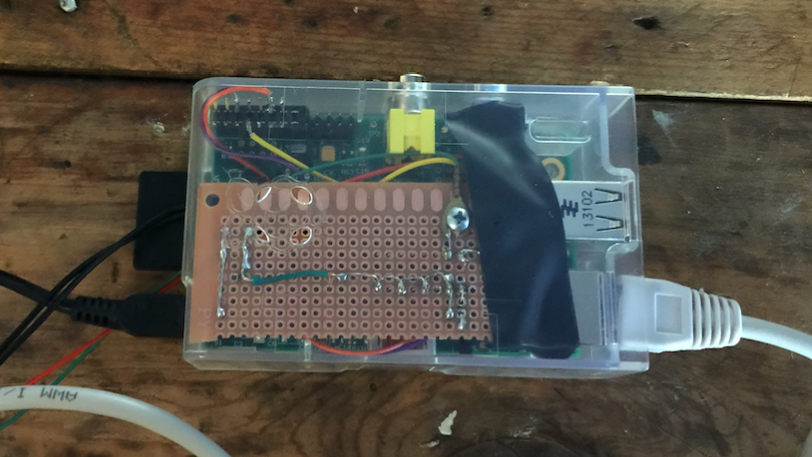 Prior experience indicated that Ionic would make the mobile app development portion trivial.

The core concept for the mobile UI here was to list one or more “things” that have state and can be toggled:

The core concept for the controller was to provide the list of “things” that know how to fetch state and be toggled:

This code could definitely use improvement (and reveals other problems), but this resulted in a decent app: 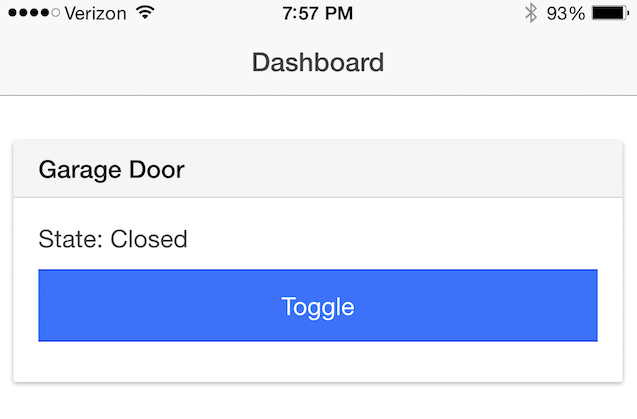 After soldering the wires from our opto-isolator into the manual switch, we’ve got this: 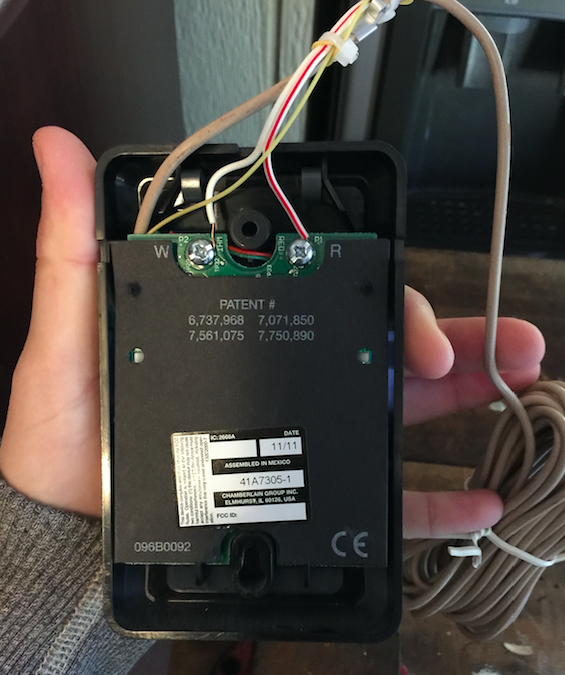 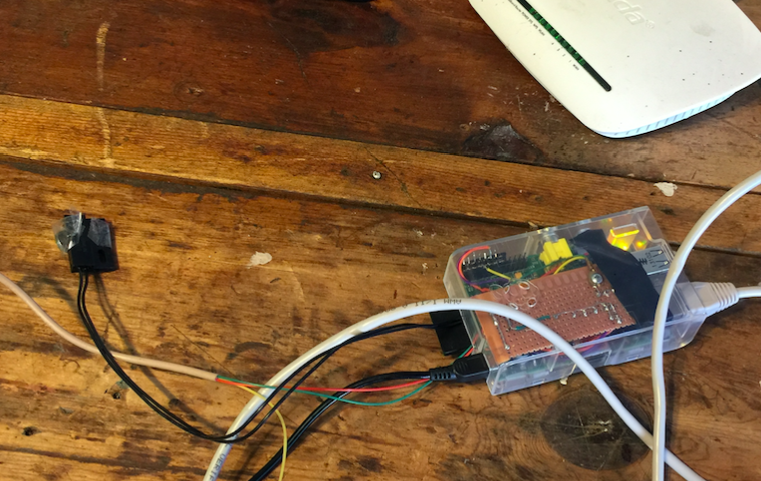 You can see the whole thing in action in the video at the top of this post.

After some failed attempts with default sources and unmaintained PPA’s, I found Dave Cheney’s website where he distributes ARM tarballs of Go: http://dave.cheney.net/unofficial-arm-tarballs

Let’s say you have something listening on port 4000, when you hit that port nothing happens, and you can’t start any services on that port because something is using it.

On Mac you can find out what process is using it by executing lsof -i :4000

This command will show you the program, pid, and many other pieces of information you can use to track down and kill the process.

The instructions here are useful although the current packages in Arch and Debian repositories do not work with iOS 7 (Trust Loop Bug) but it is still a good starting point to understand how this works.

In order to get iOS 7 support, we need to compile everything from source. Find the scripts for ArchLinux and Raspbian here: https://gist.github.com/kfatehi/8922430

(You can unmount using umount /media/iphone)

You should now be able to view the contents of your iPhone.

At this point you should reboot so that modules and rules get loaded. After that, I gave up on ArchLinux due to issues getting actual network traffic to go across, so I can’t speak for ArchLinux from herein. However I did have success on Raspbian. You should be able to simply plug in your iPhone and see a new interface come up and be able to ping the outside world. Enjoy!

Don’t bother with any of this. Use sinopia instead! I’ve prepared a docker image for it as well.

This tutorial is my version of this other tutorial.

First off make sure you have a large enough disk drive. You can find out the remote disk size easy like this:

data_size lets us know that at the time of this writing you’ll be safe
with a 250GB SSD, but it’s anyone’s guess when that will be
insufficient. Currently that’s what I’m running.

Now you have CouchDB installed and can access Futon and hopefully the
internet.

Open terminal and enter the following to setup continuous replication
from the official npm registry:

In case you ever need it:

Making sure that it keeps replicating

There’s an unfortunate issue that I’m experiencing with couchdb, but it may
just stop replicating often only after transferring 5-7 GB of
data – a trivial retrigger of the replication with the above command
would cause it to pick up where it left off, so I’ve developed a script.

For more information check out
npm-replication-watcher

This information can also be found here https://github.com/isaacs/npmjs.org. That link will also explain how to tell npm to use your new registry.

At work we have built a product that is comprised of 3 parts: a backend
written in Ruby on Rails, a web interface that is served by rails and
uses the rails controllers as usual, and an iOS app that interacts with
the Grape API mounted to the Rails app.

For the purpose of this article, a “feature file” describes a feature,
written in Gherkin, the start point for behavior driven development
using cucumber.

The rails application, or rather the interactions from the served HTML,
have feature files. This makes me feel good because if I would
transition to an HTML5 app, separated from the rails controllers, that
uses the Grape API just as the iOS app does, the feature file can be
taken and placed into a new project (say, one generated with Brunch),
and cucumber.js can be used to behavior-drive the remaning functionality
with javascript or coffeescript.

What does this have to do with microsoft? Well it seems like folks are
doubtful that microsoft will be able to contend on the mobile
marketplace against the Apple and Google platforms. The most common
argument I have heard is that “windows phone doesn’t have apps” but if
you think about it, neither did iOS or Android at one time.

Building iOS and Android apps is harder than building an
HTML5/Javascript app for many reasons. Developers are impeded on two
major, fundamental fronts:

As technologies like Apache Cordova improve alongside HTML5/CSS3, and
the javascript ecosystem becomes richer, prototyping on the web is the
obvious choice.

So back to the project at my work…

The iOS application had no feature files at all – it was terrifying for
a test-driven developer like me to have to maintain that and manage its
developers… they were like cowboys and you never knew if they would
ship with regression. Thanks to our iOS tester we catch most bugs quickly,
but the risks are unnecessary.

Luckily we found Calabash which is based on cucumber and uses the same
format for feature files. Some overlap with the web application and work
differently, and thus have different steps, but the same feature.
However the point is that now these feature files can be extracted and
placed into a new application.

This new application can be purely HTML5/CSS/Javascript and ship to
Windows, Mac, iOS, Android, the platform is not relevant as long as the
app is written in a responsive manner and has the appropriate bindings
to the OS, provided by PhoneGap, Microsoft, Qt, or whatever hackery
you’re doing to deploy your HTML5 app to the target platform.

In the future this hackery will reduce, and hardware will be exposed
directly (e.g. getUserMedia()) in a device-compatible way, and Microsoft
is just as relevant as any other. Microsoft will have all the same apps
when it costs very little to get onto the platform in the first place
– and for us, it does not cost much to get on Windows and Windows
Phone. I imagine other development shops see this too and will also
target the Microsoft platform offerings.

I decided to automate this part of my git workflow. See the gist for the source.

No longer can your team claim ignorance of CoffeeScript and tout the excuse that it is difficult to debug in the console. Behold gem 'coffee-rails-source-maps'

This works in Rails 4 RC1, however I cannot install it on Rails 3.2 (coffee-rails version too old)

When is a startup a conflict of interest with existing job?

At least in Switzerland, you have to be very cautious about what of the things you create during your employment belongs to your employer. If you do not especially ask for the contract to include only results of your work for the company, all your private inventions and achievements not only in your field of employment can be claimed by the employer. It happened to a friend of mine that even the rights on a published book of poems were taken by his employer, another one lost the rights to a new bicycle break he invented. Both were programmers.

Some employers insist on 100% of your work time, including private work. They then claim that all achievements have been made during their time.

Rare cases I agree. And maybe its different where you live. Just read your contract very carefully.

“things you create during your employment belongs to your employer” - is this the default (i.e. with no other agreements in place) rule? In the states, that’s not the default, but it can be written into contracts and it has held up in court. – Alex Papadimoulis Oct 12 ‘09 at 16:46

It’s a little more wordy,but the standard clause boils down to this in front of the court. It is one of the things that usually are missed by people - which does not matter in most cases, but when you are successful with your startup suddenly might. – malach Oct 13 ‘09 at 4:34